Do You want Ice With That?

Well our first week of 2011 has been another challenging one. On Sun 2nd Jan we loaded the last of our supplies onto Alton and set off from Furness Vale about 7.30am, the ice was around 2" thick and we made steady progress and were busy with customers around New Mills, some of whom where desperate for a pumpout. We have installed a replacement pumpout pump as the previous one has been frost damaged.

By early afternoon our progress was slowing somewhat, Brian fished some chunks of ice out of the cut and measured them at about 3". 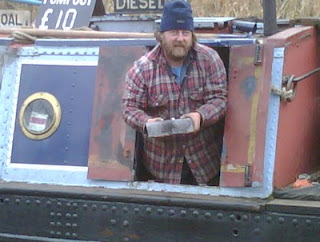 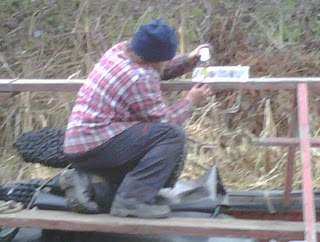 We decided to keep going, but after another hour or so we considered our progress and judged that we were averaging less than a 1/4 mile an hour, so once again we decided to let common sense rule and return to Whaley Basin and commence road deliveries again.

Below is a video clip (persevere with it as the first 30 or 40 seconds are a bit boring and we don't know how to edit it!) of Alton ice breaking near Disley on 2nd Jan. We know many customers are frustrated that we are unable to reach them by boat but we think this clip shows what we where up against and we know that the ice was even thicker further ahead.

So we hit the road once again, delivering to all our usual haunts and by Wednesday we made our last deliveries a﻿round Macclesfield and Bollington. One thing that has struck us is whilst the canal has now been frozen so long more and more rubbish and debris has been thrown on the ice, we are really not looking forward to getting a bladeful at each bridge on our first trip out. 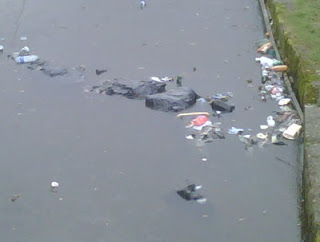 In the photo, the rubbish strewn on the ice at High Lane, which we saw whilst delivering coal to the Bulls Head.

Finally be assured that we will make every effort to be out delivering by boat at the end of next week if at all possible!

Next planned run ice allowing will be:-