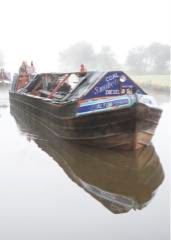 (Photo by Mike Askin of Victoria as we left the Anchor, High Offley, on the Shroppie).

The past month has been another hectic one (no change there!), but it started with a wonderful weeks break in Aldburgh, Suffolk to celebrated by Brother Mike's significant birthday. We walked on the beach, swam in the sea, had a wonderful tour of Adnams Brewery & Distillery with Headbrewer Fergus Fitzgerald & drank far too much Adnams ale & ate too much fish & chips.

We then had a family weekend in Peterborough we're our Niece Ellie was baptised & we where proud to be her Godparents.

Since then we've worked none stop & things are a bit of a blur! By Sunday 23rd of September we where moored on the river Weaver in Northwich in the teaming rain. Next morning the rain was still teaming down, we headed down river to Acton Bridge & Dutton Locks for deliveries, the river was starting to rise. We winded & made straight back for the Anderton Lift & back on the T&M. The rain got heavier as we headed back to Middlewich & the canal had flooded the towpath in a number of places, at Croxton water was flowing over the bank & a tree had fallen. At the aqueduct we could see the Dane had come right up. We locked up Big Lock, to find the Town pound flowing like a river due to the brook over flowing into it. We finally tied up for the night in darkness above Kings Lock. The rain continued for pretty much the next 2 days as we made our way back to Macclesfield looking like 2 drowned rats. Suffice to say that all this rain, then caused the breach at Dutton & damage to the embankment at Croxton which will significantly curtail our boating on this stretch of the T&M this winter.

Our plan had been to do our usual fortnightly run up to Whaley & head straight back to the Weaver for the Acton Bridge Steam Rally on the Weaver, but due to the T&M stoppages this wouldn't be possible. So instead we headed down to Nantwich on our regular run & thought about having a potter up the Llangollen. We knew we'd have a bit of a struggle getting through Hurleston Locks so decided to wait till evening to make our attempt. On entering the bottom lock we came to a stop within 6" of being able to shut the bottom gates. As soon as we tried to start flushing Alton in, boats arrived from all directions. So after shifting some of our load we backed out of the lock & decided to give the Llan a miss this time (we'll be back again though :-)).

Earlier in the day we'd seen our friend Mike Askin on the Royalty motor Victoria heading south from Nantwich, so we contacted Mike to see if he fancied meeting up the next night at one of my favourite pubs, the Anchor at High Offley & he was up for it.

We set of before dawn & had a fantastic day on a bit of cut that we'd not travelled on Alton before. The Sun shone as we made our way up, Audlem, Adderley, & Tyrely locks & we had a magical day boating down the Shroppie with the Wrekin keeping us company on the horizon to the west. We tied up before dark, grabbed some tea & headed to the Anchor. What a cracking night we had with Mike, Darren & Hazel as well as a few others. The 6X went down very well & the company was excellent, we talked "old boats" to our hearts content.

Night All!
Renaissance Canal Carrying - keeping carrying on the canals