A Wet Weekend in Marple 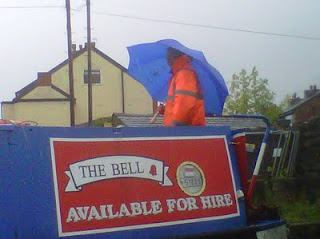 Last Friday morning with the sun beating down, I (Brian) decided to do an extra bit of boating & potter up to Marple for the weekend. It was a lovely day & sunscreen & hat were required. The canal was fairly busy & it was a crackin day to be out on the cut. I called in at Kerridge Boatyard & got an order for a set of victory black fenders from Tim at Bourne Boats ( http://www.bourneboatbuilders.co.uk/ ) so that would keep me busy knotting for the weekend. I had a few more customers before arriving at Marple that evening. As I tied up the rain arrived in force and decided to stay for most of the next few days.

On Saturday I had a few customers & a coffee & chin wag with Pete & Dave on New Horizons. In the evening Ann Marie came over to pick me up, so that we could attend a gig in Macc. The concert was at St Alban's Church Hall & was Tom Kitching's (Clayton's Tar boat Spey) band "Pilgrims Way" http://www.pilgrims-way.net/ with Gren Bartley http://www.tomandgren.co.uk/ as support. It was a brilliant night with some brilliant music, helped along with a real ale bar with 3beers from Bollington Brewery http://www.bollingtonbrewing.co.uk/ at only £2 a pint!

Sunday it rained, I stopped in the cabin as much as possible & hitched some fenders. Whilst I tried to stay dry I watched the crews of New Horizon & The Bell set off in the teaming rain with there compliments of passengers.

Monday the rain continued to lash it down. I pottered about till 10am but it showed no sign of letting up. I had quite a busy day and arrived back at Fools Nook that evening looking like a drowned rat with lots of soggy paperwork for Ann Marie to decipher. Ahhh the wonder of an English Summer!
Renaissance Canal Carrying - keeping carrying on the canals
Posted by pfccc at 9:19 pm No comments: