Alton is now a Star Class 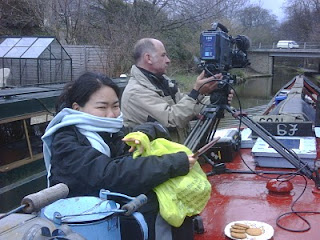 Alton is again a star in a class of her own. For the next few days and again at intervals through the year we will have a Japanese TV crew aboard. They are producing a programme about the waterways and the English countryside. So don't worry if we look a bit mob handed as we make our deliveries. If any of our customers don't want to be filmed, just ask politely and we will cease filming.

Tonight we are moored at Higgins Clough Swing Bridge and had a lovely meal with the film crew at the Conti Italian Restaurant in Disley.

Tomorrow we plan to deliver from Disley, through Marple, Poynton and Macclesfield to Fools Nook
Sent using BlackBerry® from Orange
Posted by pfccc at 9:40 pm No comments: 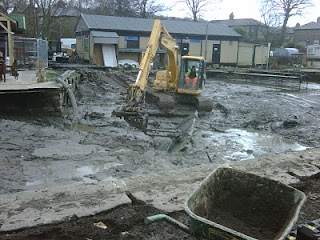 Today we have been down to Bollington to check on progress on the stoppage. We have been assured by both BW and the contractors May Gurney that the aqueduct will be rewatered by 2pm tomorrow, so we should be fine for our journey down onto the River Weaver and to Ellesmere Port Boaters Gathering.

One thing that we could see that was really hampering the contractors was the shear amount of silt on the aqueduct and wharf, this despite the fact that this whole area of canal was being dredged by Blue Boar in January to March, though a lack of joined up thinking meant that they didn't dredge this area first.

Anyway we will be very glad to see many of our customers by boat for the first time in 5 months.
Sent using BlackBerry® from Orange
Posted by pfccc at 8:26 pm No comments: 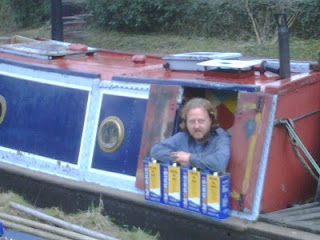 Well now that spring is here and we are getting ready to set off for Ellesmere Port, it's time to get a few jobs done. Ann Marie has been painting the cabin roof, tidying the cabin and restocking supplies. Brian has been going round with grease gun & oil can, changed the oil in the Petter PD2 and a few other jobs.