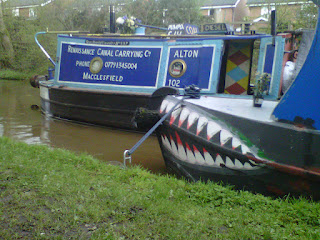 
Please note the above schedule is our plan, but it may vary dependent on traffic, customer volumes & stoppages. So if you need supplies it's best to give us a text or call on 07791345004 to ensure delivery.

Cheers, Brian & Ann Marie
Renaissance Canal Carrying - keeping carrying on the canals
Posted by pfccc at 11:16 am No comments:

Well it's been a md busy month and I'm afraid our blogging has suffered! However, whilst weve been quiet customers old & new have been featuring us in thier blogs.

Ann Marie met up with Fiona & John on NB Epiphany, who called in for supplies whilst we were tied up at Oakgrove. We then featured in their very comprehensive & interesting blog: http://nbepiphany.co.uk/

On the same day Brian was having a short boatmans holiday helping George & Irene Boyle bring Badger back up the Cheshire Locks on their way back from Elesmere Port Easter Rally. He had a fun day & managed to keep in touch with a few updates & photos on Twitter, much to Irene's annoyance 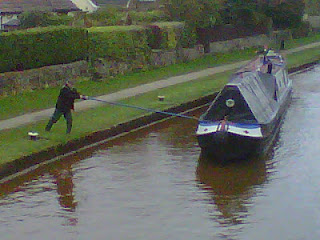 Over the weekend run 28th to 30th April the weather was atrocious and we had some serious fun in the wind and rain. After leaving Marple on the Sunday morning, the wind was blowing a serious whooley, after passing through bridge 21 near Strines, we suddenly heard a tremendous creak & crash, as we looked behind we saw that one of the tall pine trees had fallen over the canal & was resting on the cottage on the opposite side of the canal, Brian managed to get a quick photo as we made our escape! 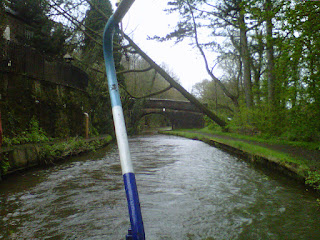 We carried on battleing against the wind, near New Mills we passed the trip boat the Judith Mary & gav e our friend Paul the steerer a wave, soon after Paul phone us to say that he had broken down, due to a broken oil feed pipe, so we reversed back towards New Mills to pick up the tow. Oh what fun towing a trip boat of passengers backwards in gale force winds! 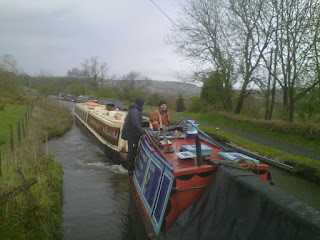 Our antics where also caught by Geoff on NB Seyella on his blog: http://www.seyellas-journey.blogspot.co.uk/

After completeing the towing we served our remaining customers at Whaley Bridge & Bugsworth, one of our new customers around here is NB Rakiraki, which is a hostel boat operated by Ruth & Mark trading under the name of  "Wandering Duck" for more details see: http://wanderingduck.co.uk/ . After we'd tied up for the night we nipped in to the Navvy at Bugsworth for a pint and bumped into Ruth & Mark, so stopped for a good (duck) gossip with them! 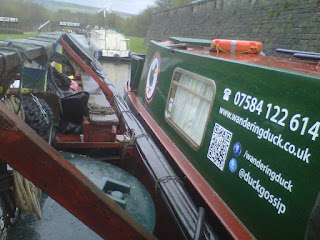 On Monday we where held up for a while whilst the  tree surgeons worked on the fallen trees at Strines, it was interesting watching them work, they did a very good job & earn thier money 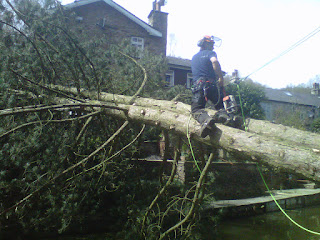 Once back at base Brian has been very busy with fendermaking, he's never had such a full order book! One job was a set of fenders for a Small Northwich Motorboat currently being restored, they were a satisfying job to see complete. 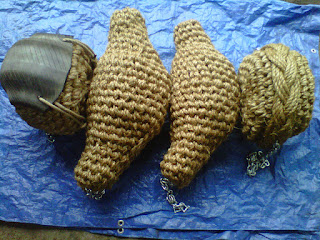 It was even better to see them fitted, with Sarah from Chertsey showing an excellent photo in her blog: http://www.chertsey130.blogspot.co.uk/

This week Brian has continued working on fendermaking & ropework, whilst we also prepare for our next Cheshire Run, we will post an updated schedule here soon or alternatively follow "Coalboat" on Twitter, which we try to update daily.