Deliveries at The Port 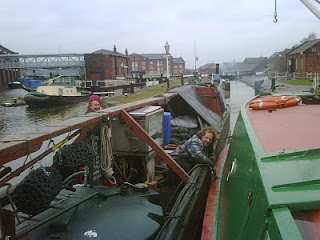 Escape from the Macc 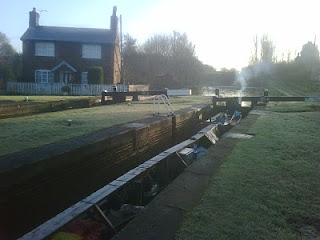 We set off from Fools Nook at 7.30 Saturday morning with Alton sitting low in the water. We made good progress through Macc and Bollington but at Poynton those dratted customers kept on coming thick & fast, darkness fell, so about 7pm we decided to call it a day and tied up opposite Marineville. We set of again at 7.30 rousing a few customers from their beds at MiddleKayle. By the time we reached Marple the rain began to fall and the wind began to blow. There was a fishing match on and we usually have a bit of friendly banter with the fishermen, but when we stopped opposite one of them to serve a customer he started ranting and raving and throwing his teddies out of the pram. "What did the hell did you do that for!" he ranted, we replied that we were just earning our living!

We made our way up the Upper Peak Forest Canal. At the 1st lift bridge we got talking to the local farmer and his wife and when they saw we sold red diesel, they asked us to fill up their tractor, so that's what we did. The rain continued to pour down as we made our deliveries to New Mills and Whaley Bridge until we tied up long after dark at Furness Vale. Brian retired to the Dog & Partridge for a swift pint of the excellent Gunpowder Mild whilst Ann Marie prepared tea.

Monday was another early start at 6.30 from Furness Vale. The sun came out and we had the canal to ourselves. We had a few customers to serve on the way back but we made good time and returned to Oakgrove about 4pm. We had hoped to nip into the Fools Nook Inn for a romantic valentines dinner but we had over 4 tonnes of fuel and supplies to reload and we didn't get finished until gone 9pm, so a take away chinese had to suffice.

The Alarm went off about 5.45 and we grabbed showers and made last minute preparations before heading off. We served a few customers and then set off down Bosley Locks, with the wind very blustery. We had a good road with the locks and at lock 10 we were joined by our good friend Graham Beard (owner of working boat Daphne) who had come to lend us a hand for a couple of days.

Below the locks we had quite a few customers before reaching Hardingswood Jn and started to head down the hill. A few more customers at Red Bull and carried on down the lock to reach Hassall Green about 7pm. Graham & Brian retired to the Romping Donkey to sample the Old Speckled Hen.

Wednesday morning we awoke to a hard frost and icy gunnels and lock gates, but very soon the sun came out to make a glorious morning. We enjoyed the journey down the rest of the Cheshire Locks, taking it in turns between the 3 of us to steer & lockwheel. Above Malkins Bank we saw the old working motorboat Malvern with a cargo of lock gates aboard. At Wheelock we fuelled up ex FMC motor boat Bream and chatted to its owner Steve. We continued to have a busy morning through Wheelock, Crowsnest and down to Middlewich. We had some chips from Kings Lock Chippy and then headed west along the Middlewich Branch.

Graham left us above Stanthorpe Lock and walked to Winsford to get the train home. We had a fairly quite afternoon but even in February we met a boat at Church Minshull Lock. We stopped for customers at Barbridge Jn and then headed south in the gathering dusk. We arrived at Nantwich about 7pm and grabbed well earned showers before retiring to the Black Lion for a pint of Peakstone Alton Abbey, agghh!
Renaissance Canal Carrying - keeping carrying on the canals