Run to the Port Easter 2012 Schedule 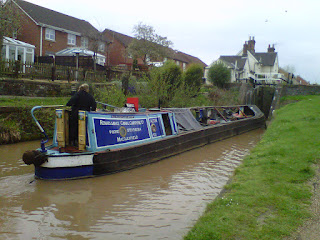 It's a bit late but here is our Schedule for our Easter run:-

Please note the above schedule is subject due to stoppages, traffic etc. So if you need supplies please phone or text us on 07791345004.

Have a happy Easter & if you are around Ellesmere Port over the weekend feel free to knock & sample some of the delicious Brimstage beer we have on board. 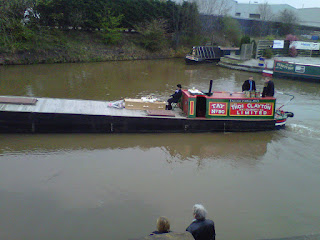 On Friday Ann Marie & I attended Maureen Shaw's Funeral. Maureen lived at Wardle Lock Cottage in Middlewich for over 40 years. She was a real character of the cut and would always pop out for a chat when I was passing through "her" lock. She would ask after various old boaters I may have seen on my travels & if my brasses weren't polished she'd give me some grief! Maureen had some wonderful tales to tell of working the boats, but she didn't look back through rose tinted glasses, many times she had very sad memories & tales of good people working hard over long hours. It was a privilege to know Maureen & the towpath was thronging with mourners watching as her coffin was loaded on to the Clayton's motor Tay steered by Jim Taylor which took her down through her lock & on down the Middlewich Locks to the Town Wharf.

There then followed a funeral service at St Michael & All Angels Church, which was packed with those wishing to pay their last respects to a wonderful woman. It was a lovely simple, traditional service which included a song written in her memory, a touching eulogy & a cracking photo of her, mop in hand on the butty Ethel. All in all a wonderful send off for a lovely woman.

Then on Friday afternoon we retuned to Alton at Whaley Bridge to load our last supplies before starting our journey to Ellesmere Port for Easter.

We had a surprisingly busy couple of days prior to reaching Oakgrove on Saturday night. Here we reloaded once again before heading off south on Sunday morning. At the top of Bosley our good friend Terry (Serendipity) was waiting to help lockwheel us down the flight, thanks for the single handing tips Terry!

We had a good run, with a nice sprinkling of customers before tying up at Church Lawton that night. After tea I walked back up to Red Bull to join George Boyle for a pleasant drink & natter in the pub.

On Monday the weather took a turn for the worse but we still had a fair run down the Cheshire Locks with more deliveries as we went. That afternoon we tied up at the bottom of our friends John & Gillian's garden in Middlewich where we were leaving Alton whilst we attended my Sister Aileens Funeral service on the Wirral.

Aileen funeral, or "moving on party" as she called it was a unique event for a unique woman. Ann Marie, Fiona, Mike, Rob, Tony & Myself were pallbearers. We draped the coffin in a rainbow flag, Matty & Sparky sang & played some of her favourite music including "Moonshadow" & "Sounds of Silence", friends & family told of their memories & read out from her letters, notes & poems.

Later we continued to celebrate Aileen's life with a big party, with plenty of home made food, Mike's wonderful beer & our own home made music. We displayed Aileen's artwork & people brought photo's & memories.

I'm sure Aileen was looking down on us all, smiling, crying, laughing & singing, she saw that we really were having a "moving on party" to honour her life & people from all walks of her life were there for her.

Let's just hope & pray that the coming weeks & months can be a happier time for us & all the McGuigan Clan.