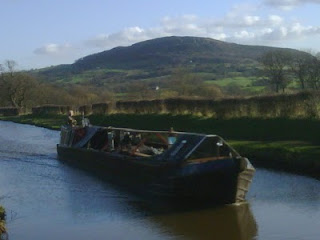 Sent using BlackBerry® from Orange
Posted by pfccc at 11:25 pm No comments: 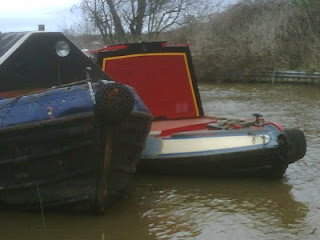 The Mersey to The Macc 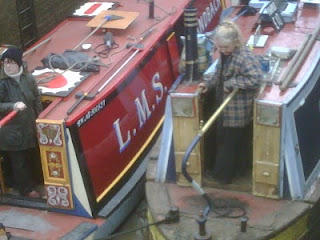 Well we had a pleasant few days boating back leaving the Port Monday midday & returning to Fools Nook Wednesday evening.

We buttied up the wide locks with George & Irene Boyle on Sandbach, stopping at the Shady Oak near Beeston on Monday night. Arriving here at 7.30 Irene nipped over to the pub to find out what time they were serving food until, she was told that they had just finished! So it was back to the boat for tea. Later we persuaded Irene to come with us back to the pub to sample their beer. Alas on arrival at the pub at 8.50 we where told that due to the bank holiday they were closing at 9pm! Well suffice to say we will not be stopping at the Shady Oak again in a hurry.

Tuesday was our Wedding Anniversary & what better a way to spend it but on a lovely cruise from Beeston, through Barbridge, Middlewich to Wheelock. We had a fairly busy day with customers and even this early in the year there were queues of up to 5 boats at the locks along the Middlewich Branch. We tied up just below Lock 60 at Wheelock and we were joined by George & Irene for a meal at the canalside mill restaurant called Murats in its current guise. The meal was reasonable but a bit pricey. We then retired to the convivial atmosphere at the Cheshire Cheese for a few pints of Hydes bitter.

Wednesday morning saw us setting of at 7.15 following a boat up the locks. At lock 63 we saw John Jackson on the coalboat Roach. He was waiting for BW to come out and let him through the Wider off-side lock having been unable to negotiate the narrow towpath side lock the previous day. We decided to have a go at getting in the towpath side lock & after about 20 minutes of effort we managed to get Alton into the chamber & shut the gates. Once in the lock Alton came up fine when the paddles where raised. We had an uneventful journey up the Cheshire Locks & as the afternoon was pleasant we decided to push on to get back to Fools Nook. We had a lovely evening working up Bosley Locks in the fading sunshine.

We got back about 7.30, moored up & tidied round. Brian felt he had earned a pint so nipped down to Fools Nook where he had a pleasant time chatting to the new Landlord Stuart & Landlady Zoe. They had a new alcoholic ginger beer in called Crabbies which was a lovely change and a refreshing pint served with ice & lemon, a great drink on a warm evening.

Well we enjoyed our first long distance trip of the year but its good to get back to base for a few days before we are out delivering again over the weekend.
Sent using BlackBerry® from Orange 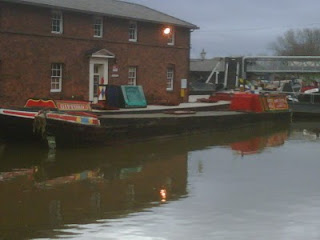 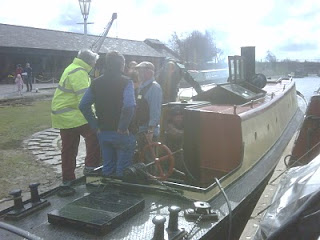 Sent using BlackBerry® from Orange
Posted by pfccc at 12:04 pm No comments: