George Boyle Back on Alton's Tiller on the T&M 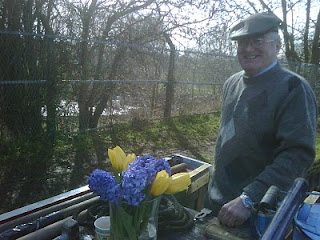 Renaissance Canal Carrying - keeping carrying on the canals
Posted by pfccc at 9:43 am No comments:

Gettin 'em Ahead - Nantwich to Ellesmere Port to Anderton 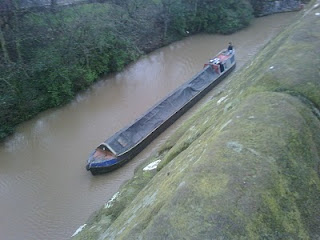 Well it's been an enjoyable few days boating and we've managed to get plenty more miles and locks under our belt. We had another early start from Nantwich, over the aqueduct and out of town to wind. We made good progress back to Barbridge and headed north serving a few customers around Calverly. It was good to do a few wide locks down to Chester and we even arrived in the city before it got dark. We moored just before the walls and went out to sample the fine hostelries of Chester. We started at the Mill Hotel which was busy and had a great range of 12 Real Ales at reasonable prices (for Chester). We moved on to the Canalside where we enjoyed the Copper Dragon Golden Pippin. We were the only customers when we arrived and only a couple more customers came in whilst we were there. We then made our way just the other side of the bridge to the Old Harkers Arms. This is a Brunning & Price Pub that was packed. The beer was more expensive but a good range of about 6 beers. We finally got a table and treated ourselves to steak for dinner. It was absolutely delicious, great flavour and succulent. We had a bit of a late night as we knew for once we didn't have to be up early as Northgate Staircase was not due to open until the afternoon.

Our heads weren't too bad in the morning, so we had a coffee and brunch before striding out for a walk around Chester's Roman Walls. We pottered down to Northgate about 2.30pm just in time to see Jim Taylor and his BW team complete their work and see us through the locks. Brian didn't even really need to don his raincoat for the usual drenching he gets from the top gates so well done BW. Leaving Chester we passed the old Shropshire Union Yard, previously operated by Boatbuilder Dave Jones. Dave has now retired and new tenants have taken on the lease and where busy tidying the yard. They plan to still operate the site as a working boatyard and we wish them the best of luck at this historic location.

We made steady progress along the Wirral Canal arriving at Ellesmere Port just after dark. We then retired to Brian's parents for the evening relishing in showers and home cooked food as well as good company.

Saturday saw us making deliveries at Ellesmere Port Boat Museum, a very big thank you to Steve Stamp (EPBMS Chairman). We were then joined by Brian's Brother Mike for the journey back through Chester. He enjoyed his days boating and with his help on the locks we made good time reaching the Shady Oak nr Beeston about 7pm.

Sunday morning required another early start as we wanted to reach Broken Cross Northwich that evening. We were straight into the locks and had the cut to ourselves, passing the first boat mid morning on the nasty bend where the main road crosses the canal near Barbridge. There was more traffic and customers on the Middlewich Branch and we reached Middlewich about 3pm. We took a left turn at the junction and carried on down the locks and finally through Big Lock. The culvert has blocked or collapsed here so the water levels on the long pound were a little lower than usual, meaning progress was a bit slow. We finally tied up after 7 again at Broken Cross, Northwich.

Shortly after our friend Mike Askin turned up on his GU motor Victoria and he joined us for a chinese take-away tea in Alton's backcabin.

On Monday Mike headed off to the Anderton Boat Lift with Victoria and we planned to follow soon after, but not before we loaded coal and diesel. Our coal delivery turned up promptly and we were loaded in under an hour, but unfortunately our diesel supplier let us down due to a technical fault on the tanker. Eventually we loaded with diesel at 3pm, too late to get the passage down the lift. We set off north serving customers along the route to Anderton, before mooring up for the night just before the lift.
Renaissance Canal Carrying - keeping carrying on the canals 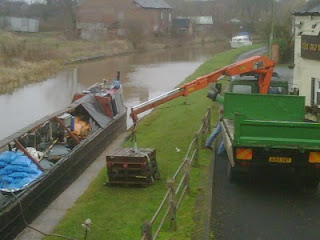 Renaissance Canal Carrying - keeping carrying on the canals
Posted by pfccc at 12:45 pm No comments: