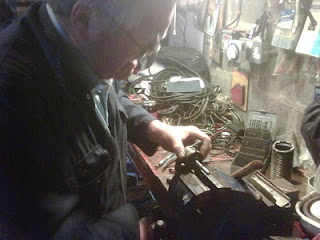 Work is progressing well on Alton's latest repairs, Steve has done further work on the cabin and started the paint work.
Meanwhile I went shopping for the parts to repair our diesel dispensing pump, the new bolts, nuts, roll pins and split pins, cost the pricely sum of 84p from Delaney's in Macclesfield (I'd recommend this very helpful company for any hardware or engineering supplies). George Boyle then did a stirling job in his workshop, repairing the damaged shaft and handle mechanism. We returned to Ashton to reassemble the pump and in George's words it ran "as smooth as silk!" It's a relief to have the pump fully working once again & thanks for your help George.
Renaissance Canal Carrying - keeping carrying on the canals
Posted by pfccc at 10:58 pm No comments: 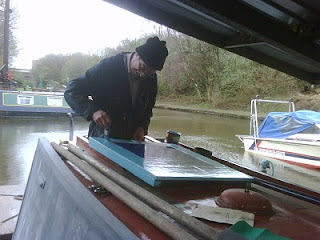 Renaissance Canal Carrying - keeping carrying on the canals
Posted by pfccc at 11:20 am No comments:

Primer on Second Cabin Side 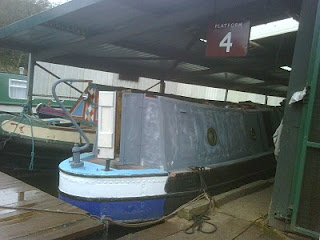 Renaissance Canal Carrying - keeping carrying on the canals
Posted by pfccc at 11:19 am No comments: 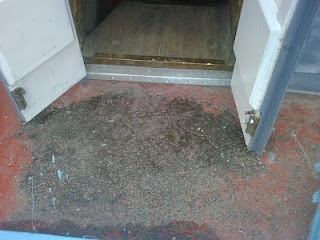 Renaissance Canal Carrying - keeping carrying on the canals
Posted by pfccc at 11:18 am No comments:

Chimney Side and Another Coal Run Complete

We returned to Ashton on Thursday 24th March to find that the repairs, painting and signwriting to the chimney side were complete. It was great to see our company name adorning Alton's cabinside, its been a long time coming, but the costs and time of maintaining & keeping a working boat in good condition are immense for a small business such as ours. Over the last few years we've had to do lots of work on other less visual areas such as re-bottoming, renewing damaged sections of the hull as well as repairs to the cabin structure. We had set our sights on getting Alton into a good condition for her 75th Birthday (this year) and we know the painting and signwriting will be the icing on the cake! 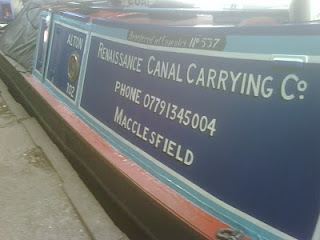 We had some discussion about the colour scheme and signwritting, but in the end we decided to use the original blue/blue Grand Union Company colours that Alton was painted in originally in 1936. As for the signwritting we decided to keep the same style and layout as the Grand Union Company, but with our own company name, and details. We think this gives a good combination between Altons historical & contemporary uses.

We set of from Ashton around Midday with myself (Brian) and Graham on board. We had a beautiful sunny day, but spent quite a bit of time with the shaft clearing the rubbish of the prop in the narrows. We were joined by George at Romiley and so where 3 handed for Marple Locks. We made reasonable progress up the locks but where frustrated by the stiff paddlegear, breaking a windless on one stiff paddle. We where later told by a BW worker that they where no longer allowed to oil the shafts as the oil could pollute the water! At lock 5 the top gate had no paddle, but the gear had been greased, its been like this since Sept/Oct last year and this makes filling the lock very slow and awkward with a full length boat. Two other locks had none operating paddles, as the racks had come of the gear, but we managed to fix this with the use of a crowbar. 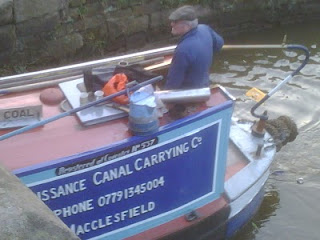 Graham left us at the top lock about 6pm and we motored on Furness Vale for the night, where George and I enjoyed a few good pints of Unicorn in The Crossings (I also enjoyed a lovely complementary curry for tea).

On Friday morning Graham and his adopted dog Jake arrived and we loaded with coal & diesel at Whaley Bridge Basin. 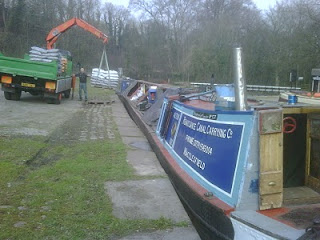 After a bite of lunch we set of delivering around Whaley Bridge and Bugsworth. We had a bit of a problem with our diesel dispensing pump, so after a quick visit from George we were able to effect a temporary repair, allowing us to continue selling diesel over the weekend. After further deliveries at New Mills we tied up for the night and retired to the Beehive for a pint.

On Saturday morning we had an early start, but with a reasonable load on and the water level in the canal down by 3 to 4" it was slow going and we stuck in Turf Lea Lift Bridge for over 30 minutes. Once we reached Marple the wind really started to get up. We knew we were going to be busy so we grabbed some sausage butties for breakfast and then set too with deliveries. We had a very busy time around Middle Kayle & Higher Poynton, we really struggled with the howling wind and luckily we had some very patient and helpful customers. Unfortunately whilst trying to shaft the boat back out into the channel Graham went a cropper and took a swim. He soon got himself out, dried and changed, none too much the worse for his ordeal. 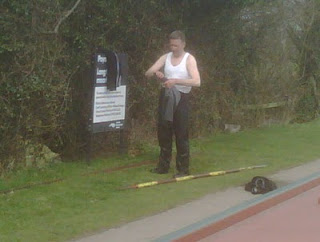 We continued our busy spell and where very grateful for the cups of coffee that kept us going and thanks to Sue for the quiche (if real men don't eat quiche, we don't care!). We finally tied up in Bollington well after dark. We walked down to the Vale, but they were not dog friendly, so we retired to the Holly Bush for a well earned pint, we planned to grab fish & chips or chinese takeaway for tea, but by this time we were too late, so we just hit the sack!

After loosing an hour due to the clocks going forward, we were still up before dawn to try and make up some time by making our way through Macc before any customers roused. We winded at Fools Nook, before doing some reloading and unloading at the wharf. We then made our way back up the Macc. It's at this time we start to see some of our winter regulars heading of on their travels. On Sunday we said goodbye to Ken & Barbara on Summer Breeze: 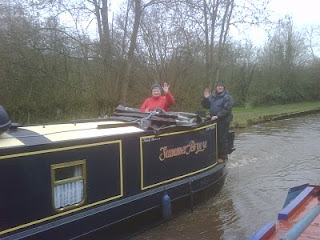 As well as the terrible duo of Gemini & Tilly: 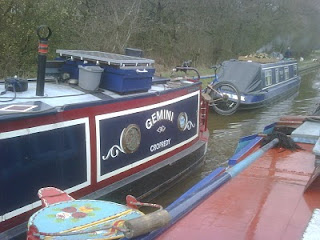 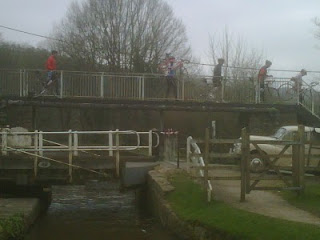 We had a reasonable run back, but again struggling with the water levels being a bit down, getting stuck in Bridges 35 and 20. In Bollington we were joined my brother Mike and his friend Radka (who had been at the Treacle Market), they had a little trip on Alton where we supplied them with tea & cake, they returned the favour by bringing us some great beer from Tatton & Redwillow Brewery as well as cake and bread baked by my Mum :-) . 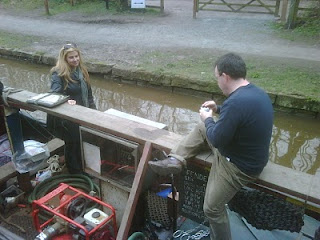 We finally tied up for the night in Marple ready for a good start down the locks in the morning.

Monday morning dawned bright, we were joined by George Boyle and after a couple of deliveries we set of down the locks. We made good and fairly uneventful progress down the locks and through to Portland Basin. We continued down the Ashton with a couple more deliveries, winding above fairfield locks and finally back into the wet dock at Ashton Packet for Alton's docking number 4. 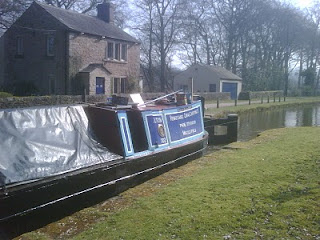 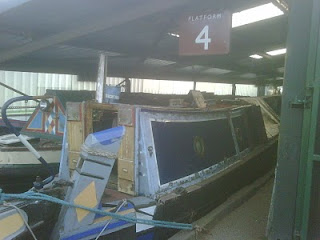 A big thank you to Graham and George for all there help again, It's good to have such good friends I can call on.
Posted by pfccc at 8:36 pm No comments:

Graham & his faithful friend Jake on Alton at Marple Aqueduct 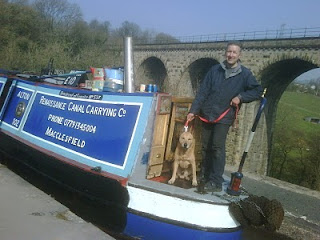 Renaissance Canal Carrying - keeping carrying on the canals
Posted by pfccc at 2:11 pm No comments: 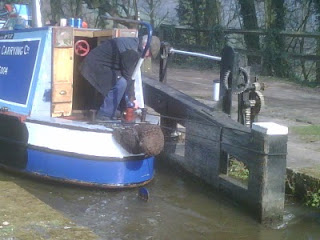 Renaissance Canal Carrying - keeping carrying on the canals
Posted by pfccc at 2:10 pm No comments: 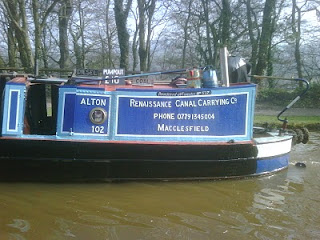 Renaissance Canal Carrying - keeping carrying on the canals
Posted by pfccc at 2:09 pm No comments: