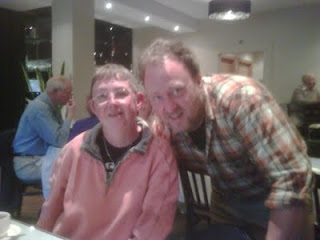 We are planning on operating Alton from Oakgrove up to Whaley Bridge & back over the Bank Holiday weekend. However Brian's Sister Aileen (who some of you will know) has been admitted to hospital (after a long illness) & is really very poorly. So it may be that over the weekend or coming weeks we may have to abandon ship or change our schedule. So whilst we will try our best to avoid any disruption your patience & understanding would be much appreciated, as she really is a very special Sister.
Renaissance Canal Carrying - keeping carrying on the canals
Posted by pfccc at 10:06 pm No comments:

Where did that week go? 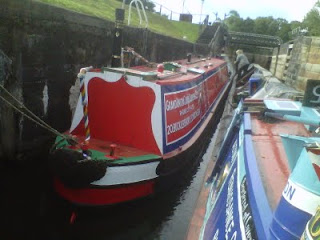 Well it's been a very busy week, even for us! We made it to into Chester as darkness fell on Friday evening after having fun convincing 2 other boats to do the Bunbury Staircase shuffle with us earlier in the afternoon. In Chester Brian checked out the Cellar Bar very near the canal (by the Old Harkers Arms) and was rewarded with excellent beers from Liverpool Organic (Iron Man) & Tatton (Blonde), friendly locals and a decent band.

On Saturday we made our way down Northgate Staircase (not too wet these days) and along to Ellesmere Port Boat Museum. After completing our deliveries we winded and had a fairly busy afternoon as we headed back to Christleton. That evening we met up with Brian's Brother Mike at the Bridge in (nr Tarvin Lock) for good Salopian beer & some excellent value food, unfortunately the band then struck up & it was too loud to hear ourselves think so we retired for a reasonably early night. Ann Marie managed to rouse herself early & set off south, at her first customer (Wine & Roses) we received cups of fresh coffee which was enough to shake Brian from his slumber. We made good progress to Barbridge & across the branch back to Middlewich. We had a final few customers in the town pound before tying up for the night below Big Lock. Decent real pubs in Middlewich seem to be getting a bit thin on the ground, so Brian thought he would grab a swift pint at the Narrowboat before a late tea. They looked to have a few cask ales on but on asking for Buttercombe Blonde, was told it was no longer on, but they didn't turn the pumpclip round grrrr! He settled for a pint of London Pride which was OK but nothing special.

Early Monday morning and it was Brian's turn to take the early shift, the sun was shining & it was a lovely morning to have the cut to yourself. We got busy around Marston & Anderton before getting a 2.15pm passage down the lift. On the river we went up into Northwich serving a few customers & then down to Saltersford & back to tie up in town for the night.

On Tuesday morning we set off about 7.30am & had our first customer at Hunts Lock before the Lockies had arrived. We had a few more customers in the reach above the lock including oiling up the GU motor Alcor. We then headed down stream, back through Hunts, Saltersford & to Dutton Locks with various deliveries on the way. We then managed to get back up the lift on the last passage of the day. From Anderton we headed north through the tunnels for our a few more customers before winding and finally tying up at Marston Salt Works as darkness fell. We stopped next to our friends Hew & Jenna & (Kizzy & Eva) on NB Meridian and joined them for drinks on deck & a catch up with each others news.

Wednesday morning saw us reloading Alton with diesel. We were finished by midday. Accompanying us on our way up to Wheelock was a fendermaking friend Chris on NB Cheshire Belle & at Middlewich we where joined by Alex (NB's Witchcraft & Bewitched), so Alex & Ann Marie worked Alton up the locks (thanks again Alex) whilst Brian stayed with Chris giving him some pointers on working single handed. At Wheelock we retired to the Cheshire Cheese in company with Chris and had a fendermakers convention along with Liz & another fendermaking Chris, so we had a pleasant evening getting knotted.

Up at 6am, there was a mist on the cut as we set of up the Cheshire Locks and after a long & busy day we returned to Oakgrove (Macc) at 10pm.

I've been writing this blog post on & off over the past hectic week, so although its not finished I'm posting it now before it get forgotten about!