River Weaver and back to Whaley Bridge 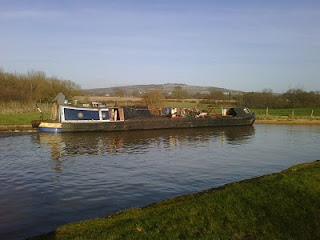 Well the past 17 days have been a busy time for us as we completed our first big run of the year. We've done about 260 miles, 138 Locks and 24 swing/lift bridges. We've thoroughly enjoyed the journey and its been great to meet loyal customers that have gone out of their way to support us and meet many more new customers, it's given us a real buzz & made us realise that the effort of operating such a big round is worth it.

Anyway back to the story. At 8am Tuesday morning 2 people were knocking on the cabinside, luckily we were up and about. One was a customer for coal, the other was Jason the BW Supervisor? for the Anderton Lift. Jason confirmed that they had a problem with their phone lines but he had finally got our message that we had deliveries down on the river and wished to use the lift. We discussed what we needed with Jason and he went off for half an hour or so to see what he could arrange. He returned to tell us that it was unlikely that he could get us down the lift that day but he could get us down the lift early next morning and back up when we returned later in the afternoon. So we made good use of the day and headed north up the T&M and through the tunnels to Preston Brook. We had a few customers on the way including at Tim Leech's Dutton Dock, where we caught up with Tim and Roy and had a quick look at GU boat Alcor on the dock for repairs to bottom boards and footings. We returned to Anderton that evening to a flurry of customers as dusk fell.

Next morning we where waiting at the lift bright and early, unfortunately so was everyone else. It was decided we would go down on the second passage, so the first two boats went down about 8.30am. Only one caisson was operating and one of the boats that went down was just winding and coming back up. Unfortunately on their return journey the caisson door would not raise. By about 11.30 BW staff managed to get the boat & crew out of the lift (much to their relief), but it was another couple of hours before they traced and rectified the fault (broken solenoid). So it was 1.30pm before we descended in the lift. At this time there was a lot of doubt from various BW staff that we would get back through the locks let alone the lift that night. We only had a handful of deliveries to make on the river but they where spread out and consisted of a few tonnes of solid fuel and reasonable quantities of diesel. We shot off up stream delivering first at Yarwoods, we opened up the engine and made good progress. Jason was good to his word (he knew we had to be back at Macc to reload on Friday) and really helped us by arranging for the locks to be opened late. We finally returned to the lift at dusk, the BW guys were ready and waiting & we went straight in, straight up and straight out, a big thanks to Jason & the BW team both on the lift and on the River Weaver Locks!

That night we did a bit more boating before tying up at Wincham Wharf where we enjoyed a very pleasant evening catching up with our friends Roy and Mel aboard NB India.

It was an early start next morning if we were to get back on the Macc. Brian was up at 5.30am and enjoyed a lovely early mornings boating before rousing our first customer from their slumber at 7.30am. At Middlewich we found that a BW crew with a workboat had just gone up in front of us, but good enough they lifted a paddle for us. At Chemic Locks (Booth Lane) we met up with our old friend George Boyle, who had very kindly offered to be Alton's steerer on the run back to Macc. George got on the tiller straight away and carried on up the locks passing the GU butty Serpens looking in good order (when we looked carefully we could see the joins where she has been re-lengthened with the original sides that had been previously cut out. We had quite a few more customers that morning, the sun was shining and it turned out to be a beautiful day. Some people describe the Cheshire Locks as "Heart Break Hill" but we have always found them a pleasure to work. George was in his element at the tiller and we loved working our way efficiently up the hill. We had our final few customers of the day around Red Bull (where we met up with Steve Wood on the Josher Motor Bream who had set us some locks as he went up the Red Bull flight in front of us) before tying up for the night up just past the aqueduct on the Macc just as the light faded. We treated ourselves to tea in the Red Bull Pub, where we had good food & good ale followed by a great evening of blue grass music. That really was a super end to a perfect days boating.

Next morning we set off under grey skies with slightly fuzzy heads. We made deliveries at Scholar Green, Congelton and Buglawton before arriving at the bottom of Bosley Locks. We hadn't seen a single boat on the move all day, but we soon realised that two boats where making their way up the flight ahead of us. We soon caught them up & we took turns in going ahead and setting some locks for them.

We arrived back at Fools Nook about 3pm and spent the afternoon re-loading Alton with supplies and making local deliveries by road.

There's no rest for the wicked and the alarm woke us at 6.30am Saturday morning, it was bliss to get a shower before we set off. It was pouring with rain as we made our way into Macc but by mid morning it had eased. We called in at Kerridge dock and then through Bollington. We were making good time but at Poynton we got busy again and by the time we were delivering to the Bulls Head at High Lane it was dark. We continued on to Marple, tying up near the Ring o' Bells, where Brian nipped in for a swift pint before tea.

Next morning the rain was lashing down and followed us all the way to New Mills, even so it was great to be back on the Upper Peak Forest Canal. We continued our deliveries around Bugsworth and Whaley Bridge, it seemed weird seeing so many boats on the move & meeting them in bridgeholes and blind corners. We finally moored up for the night in New Mills, we still had time to play cribbage whilst tea was cooking & then hit the sack for an early night.

Next morning Ann Marie set off before 7am leaving Brian in bed with a cold / man flu. He managed to rouse himself to steer for the lift and swing bridges before going back to bed. Unfortunately Ann Marie kept finding more customers on the return journey so she managed to drag him out of the cosy cabin at regular intervals. We arrived back at Oakgrove late afternoon and boy was it a good feeling to be back at base for a few days!

A big "Thanks" again to all our customers, our helpers Graham Beard, Mike McGuigan and George Boyle as well as Jason at the Anderton Lift and all the BW boys in blue who helped us on our way. We're looking forward to the same trip in April as we run to the Easter Gathering at Ellesmere Port Boat Museum, we should have recovered by then!
Renaissance Canal Carrying - keeping carrying on the canals 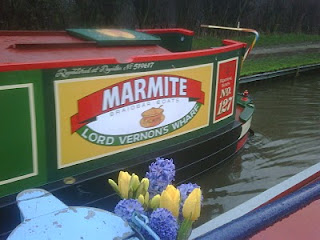 Renaissance Canal Carrying - keeping carrying on the canals
Posted by pfccc at 9:25 am No comments: