Report from the Port 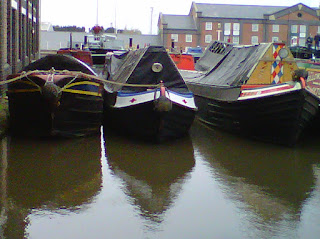 On Wednesday lunchtime we set off again from Middlewich heading across the new cut. Thanks to John & Gillian for keeping an eye on Alton & to the owner of Lady Margaret for retrieving one of our cloths which had blown off in the high winds.

We had heard via the towpath telegraph that there was an emergency stoppage on Cholmondeston Lock starting at 4pm & so pushed on to try & get through. We arrived at 4.10 but the BW Lads had heard we were on our way so where waiting to lock us through, nice one chaps! We made our final deliveries of the day at Calverley before tieing up, having tea & catching a much needed early night.

Thursday morning we made use of the shower at Calverley Services & set off. Through the morning we were passed by Mary on Swan & Malcolm on Greyhound, both on their way to the Port. We stopped in Chester for some last supplies before buttying down Northgate Staircase with Ally & Derek on Taurus. We tied up for the night at Chester Basin where we had a natter with other boaters followed by a lovely dinner aboard Caracus with Jason, Viv & family.

On Friday morning we set off in convoy with Taurus heading for Ellesmere Port with a few deliveries on the way. We arrived at the Port about lunchtime & lots of people congratulated us on our 10th Wedding Anniversary, it was even announced over the tannoy! We had a pleasant afternoon catching up with friends old & new. In the evening we smartened ourselves up (lots of people didn't recognise us!) and went for dinner at the Holiday Inn (where we had our wedding reception). We had a lovely evening, with good food & good company as we dined with Jan Burnip who happened to be eating there. By the time we got back to the Museum we missed the talk but had a good time socialising & chilling out.

We had to be up early on Saturday to load diesel as we were nearly out of stock. The delivery was fairly prompt so we soon had full tanks again. We decided to treat ourselves to breakfast in the museum cafe, Brian had the works whilst Ann Marie went for a bacon butty. We were joined again by Jan Burnip & joked that we thought she was stalking us.

We had a busy afternoon with lots of visitors including the Fletcher Clan John, Kate, Abby, & Dani as well as Brian's Dad Bernie, Brother Mike & Canadian friend Gary. We also boated around the museum with various people on board making deliveries to other boaters & to the museum.

In the evening we ventured into Chester with Bernie, Mike & Gary, having drinks at the Spitting Feathers Brewery Tap followed by dinner at the Albion (a pub we've wanted to visit for a while). The food was simple but wholesome & the beer similar. We even got to meet up with Brian's Cousin Marieanne & partner Jason. Suffice to say a good night was had by all.

Finally a round up of attendees, historic narrowboats at the Port where:-

Whilst the numbers of visiting boats was down on last year & the weather not so kind, we still had an enjoyable Easter weekend at the Port