Fooling about at Fools Nook! 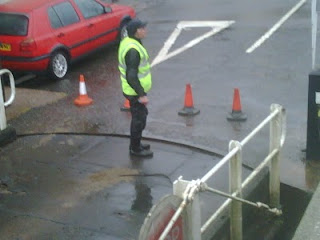 Well after a busy 4 days boating we managed to get Alton back to Fools Nook for the first time in 2 1/2 months. We where frustrated by problems with Oakgrove Swing Bridge 49. We had heard from a customer on Friday that the swing bridge was out of order, we phoned BW at Red Bull & asked if they could sort it. BW said they where confident they knew what the problem was and they would have it sorted. We explained that we would need to go through with Alton on Sunday.

BW Engineers went out to investigate and (we were later told) found an electrical fault and a mechanical fault. They the imposed a temporary stoppage and put a notice on the control panel stating that BW would only operate the Bridge at 10am & 3pm on Sat & Sun. However they didn't send out any official stoppage notice & they didn't phone us back to let us know there was still a problem.

So when we arrive at the Br 49 in the wind & the rain we find the control panel covered bt a laminated sign & sticky tape. We rang freephone canals (i.e. expensive from mobiles). & when the Supervisor? Rang back, he told us we would have to wait for the BW staff to operate the bridge at 3pm. We asked why he hadn't sent out a stoppage notice but his reply was "he didn't have the authority to do that".......

Anyway at 3pm the BW guys turned up with there cones and power pack and set too operating the bridge for the 3 boats waiting.

BW returned to the bridge 49 this morning and declared it fit for operation, but when we once again found that the bridge would not open and kept hold of our key. After a call to Steve O'Sullivan at Red Bull, 2 BW guys came out to reset the bridge for us. They told us that a component in the control box needed to be replaced to stop it "tripping out". They said hopefully it will be replaced today, so we will be keeping our eye out on how the bridge performs over the next few days.
Renaissance Canal Carrying - keeping carrying on the canals
Posted by pfccc at 9:40 pm 4 comments: