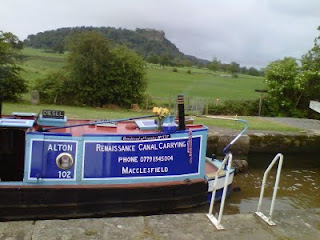 On Monday morning we finished re-loading Alton about 10am and set of south down the Macc. We had a good run down Bosley with very few other boats around. We had regular stops along the lower Macc, reaching Hardingswood junction about 6pm. We started to make our way down the Cheshire Locks, seeing only one other boat moving all the way down to Lock 60 near Malkins Bank where we tied up in the Moonlight.

We wanted to make sure that we made good time to Ellesmere Port so we set off about 6.30am and had the locks to ourselves all the way down to Wheelock. We stopped for water & showers at Wheelock & carried on refreshed. We had more deliveries art Crows Nest & where in Middlewich before lunch (so no chips). The weather was glorious sunshine & we had a great trip along the Nee Cut over to Barbridge, with few delays on the locks. At the junction we turned left towards Nantwich, but had a fairly quiet run before we winded after the aqueduct. We decided to keep plodding on down the wide locks and finally tied up at the Shady Oak nr Beeston at 10.30. Brian was not impressed to find the pub had shut already as he had set his sites on a pint.

Another early start saw Ann Marie on the tiller & Brian snoring in bed. He managed to rouse himself before the next locks (just). We shared the locks with the trip boat for the disabled "Rainbows End". We had a good run sharing the workload between the 2 crews. Rainbows End tied up at Cow Lane in Chester & we continued down Northgate Staircase on our own. We tied up in Chester Basin & stopped for fish & Chips for lunch, what luxury. Just as we finished, Mike & Cath Turpin & crew arrived on Radiant & Regulus, on there way to the Braunston Rally. We fueled up Radiant & they headed off up the staircase. We had a busy afternoon on the Wirral canal & arrived at the Port about 5.30pm, it was great to have an early finish. We were warmly welcomed by the museum time who were celebrating the apprentices passing out. We were invited to join them & shared their delicious food of salads & burgers etc whilst watching the apprentices & volunteers canoeing & zorbing as well as musical entertainment from Tom Kitching & Gren. After all that we retired to the Thomas Telford Pub to meet up with Brian's brother & sister Mike & Fiona, it was great to catch up with them.

Next morning the rain was pouring down, but Dave & the team dragged Mendip out from under the shed so that we could fill her big boliner tank with diesel. This used the last of our supplies, so we waited patiently at the Wharf for our tanker delivery from stanlow. Shortly before noon it arrived & we could then re-commence our refuelling duties on the museum boats.

Once we had finished & the sun had come out to play we set off back for Chester. We had another busy afternoon and one customer even supplied us with sandwiches & donuts for lunch. From Chester we set of up the wide lock on our own, it was very quiet with few other boats on the move. Our aim was to get back to the Shady Oak & we arrived there at 10pm to find our last customer of the day waiting patiently. Brian had a bit better luck this time & managed a swift pint of Castle Rock before last orders.

Next morning we had another early start before stopping at Calverly for a shower, only to find there was no hot water bbbrrr! It was a bit chaotic at Barbridge Junction as boats in different directions hailed us for fuel. We had a slow journey back across the Middlewich Branch, but finally made it to Wardle Lock, where we met up with Alison, Rupert & Peter. We were looking after our Godson Peter for the weekend whilst his Mum & Dad went to Scotland for a wedding. Alison & Rupert helped us down the first 2 locks, then Matt Parrot & Rebekah Fuller helped on the next 2, which saw us down in the Town Pound. We tied up in front of Saturn & Thea on the Town Wharf, along with Sweden & Tench. After saying hello to the other boater we quickly clothed up & headed of to the boaters get together at the Boars Head. It wasn't as well organised or attended as previous years but we still had a very pleasant evening catching up with other boaters & Peter kept everyone entertained playing his made up game of a cross between shuv 'appeny & air hockey, using items varying between a 2 pence piece and a pan of hotpot on a tray with Bills hat on top! Suffice to say a good night was had by all!
Renaissance Canal Carrying - keeping carrying on the canals