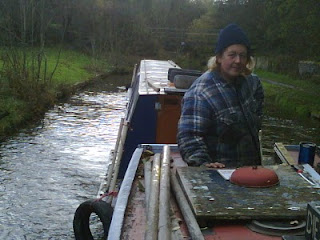 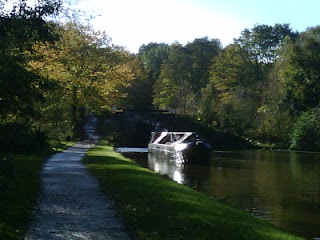 Renaissance Canal Carrying - keeping carrying on the canals
Posted by pfccc at 10:33 pm No comments: 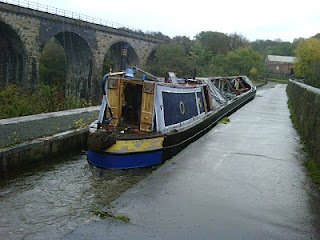 The last few days have been very busy for us working average 14 hour days to get our deliveries done & Alton back at the yard at Ashton for the next round of repairs. We've really noticed the shorter daylight hours now and are glad we have a good headlight on Alton and very good head torches for ourselves.

Alton was launched off the slip by the crew at Ashton Packet in their calm efficient matter. We loaded our supplies and left the yard at Midday making reasonable progress despite a couple of low pounds & non operational ground paddles on Marple Locks. We tied up in Marple about 7pm and Brian retired to the Ring o'Bells to join the crew of The Bell (Pete & Tony) for a pint.

Sunday was a very frosty start and a busy day resulting in us selling out of diesel. We arrived back at Fools Nook in darkness.

Monday morning was another frosty start but we kept warm re-loading Alton with Coal & Diesel. We set off heading north at lunchtime making deliveries as we went. We finally tied up at 8pm at High Lane, very convenient for the Bulls Head for a pint and a chinese take-away for tea.

Tuesday we woke to heavy rain & did not want to get up! It continued to rain virtually all day, as we made plenty of deliveries through Marple and along the Upper Peak Forest to Whaley Bridge and Bugsworth. It was lovely to chat to a few new customers as well as catch up with old ones that have returned from their travels including Graham & Eileen on NB Gemini. It was another very late finish when we tied up at the back of the swizzles factory at New Mills.

Wednesday morning Ann Marie managed to drag herself out of bed at 6am as she knew we had a long day ahead. Brian eventually roused himself from bed at the Disley swing bridge and was almost fully awake when we reached Marple Top. We made good progress down the locks on a beautiful autumnal day, making a few sales as we went. We love to stop at lock 10 to chat with the gentleman who owns the adjoining cottage who has lived there over 50 years and has some great tales.
At the bottom of Marple we picked up a towing job to tow a houseboat to Portland Basin for its owner Ashley. We had a very slow afternoon on the Lower Peak Forest getting well & truly stuck getting out of Hyde Bank Tunnel. We then got a bladeful of rope & carpet near bridge 12, resulting in Brian stripping to the waste and reaching in under the counter to cut away the debris from the prop.

We finally reached Portland Basin as darkness fell, the square bows of the houseboat having made the tow a slow job. We reunited the houseboat with its owner and continued on to Ashton Packet Boat Yard where we have left Alton again for Steve Kelly to start work on the cabin roof.
Renaissance Canal Carrying - keeping carrying on the canals

A Frosty Start. Sun 24th October, on the Macc 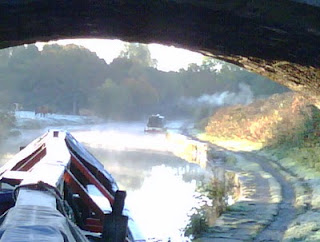 Renaissance Canal Carrying - keeping carrying on the canals
Posted by pfccc at 10:47 pm No comments: