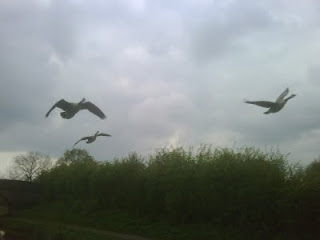 A much better day today! We set of from Marple with a nice fresh dew on the boat and a feeling of a nice sunny day in the offing. We were busy around High Lane & Poynton. Sun the sun had his hat on & was coming out to play! We had a good run down the Macc meeting customers old and new and on a few occasions being dive bombed by Canada Geese!

We still struggled with low water levels but luckily we had sold some stock so we were running a bit lighter and managed to drag ourselves through a couple of bridgeholes without outside assistance.

We got back to Oakgrove about 8pm and reloaded with supplies. Brian has gone to get a chinese take-away for tea but has taken a route via the Water Green Tavern for a swift pint!

Tomorrow it's down Bosley & start heading down the Cheshire Locks, we're really looking forward to it, let's hope it stays nice!
Renaissance Canal Carrying - keeping carrying on the canals 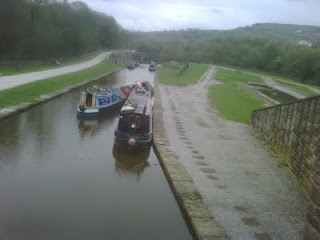 Well we haven't exactly got off to a good start. We set of late from Oakgrove Thursday evening, due to our diesel supplier letting us down. We made slow progress heading North on the Macc, partly due to us having about 18 tonnes on and partly due to low water levels. At about 9pm we stuck hard in Bridge 20. After about an hour and much help from James & Heather off NB Matilda May we finally got through. We tied up eventually at Lyme View, with just time for a swift pint at the Miners before closing.

Ann Marie was up and away by 5.30 this morning and serving her first customer by 6, whilst Brian was still snoring his head off. We stuck again under the A6 Bridge at the Bulls Head, High Lane, so Brian was raised from his slumber to give assistance. At Marple we got busy with customers and then proceeded down the Upper Peak Forest Canal. At the first Lift Bridge (Turf Lea) we went hard aground with only Alton's Bows in the bridgehole. We have been stuck here a few times before but eventually after an hour of trying all our usual techniques (including roping in passer by) we admitted defeat and phoned BW. They said they would be with us within the hour, then phoned back to say it would be more like 2. In the meantime one of our customers arrived (NB Evie) & thankfully they managed to snatch us through the bridgehole. All along the Upper Peak Forest we bounced along the bottom. At New Mills we loaded a few more supplies and but then got stuck again, thanks this time to Tony the fitter at New Mills Marina for helping us get free that time. We phoned BW at Red Bull to tell them of the problems we were experiencing & they informed us that more water would be supplied into the pound.

We finally reached Bugsworth and Whaley Bridge where we winded after serving our customers and slowly made our way back. After selling some stock Alton was a little higher in the water, but it was a still a slow and tiring journey back to Marple, where we finally arrived about 10pm.

Well let's just hope there's a bit more water in the cut and we have a better day tomorrow.
Renaissance Canal Carrying - keeping carrying on the canals 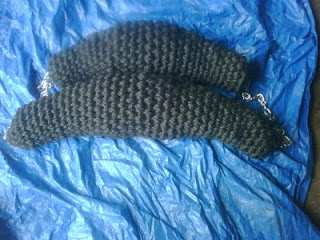 The last few days have been a flurry of activity with preparations and loading for our run to Ellesmere Port Easter Boaters Gathering.

In addition Brian has been kept busy with a flurry of fender orders. The photo shows an interesting commission for a pair of tipcats for the historic Cowburn & Cowpar motor Skylark.
Renaissance Canal Carrying - keeping carrying on the canals

Ann Marie back on the Tiller 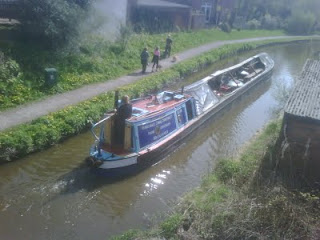 Renaissance Canal Carrying - keeping carrying on the canals
Posted by pfccc at 11:11 am No comments: